Last Saturday I went to two jewelry tool stores in Seoul.  Both were in Jongno-gu, Seoul.  The first one (in the photo below) had a pretty good selection.  I bought a nice solid plastic ring mandrel, a ring sizer, and a needle file.  I had been to the store once before in April or May, when I found it accidentally, but didn't have much time to look around.  The other store my Korean friend in the US told me about.  It was much smaller, but had a bigger selection of hammers.  Both stores had a lot of the same stuff you can find in the US, but they also had a lot of Korean made tools and some Japanese tools.  I'll probably go back later and get some hammers, pliers and maybe a few files and other random things that look interesting.

Things in Korea are going well.  This year is much like my first year where I am busy enough with other things that I don't think much about creating new work.  That's why I've made only one post in this blog since I came back to Korea.

I finally started doing some wax carving in July.  I started on a ring, it was nothing special, I just wanted to start on something.  This is my work area: 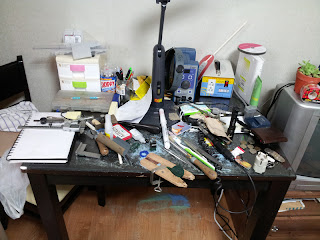 The hardest things about working at a kitchen table in a tiny apartment are that the table is too low, it's not sturdy, its not easy to attach a bench pin, I get wax all over my living area, and there isn't enough light even with the desk light.  So a lot of things suck about it.  That's why I don't try to do anything except wax carving.

I wasn't too interested in the ring I had started carving so I decided to carve a doodle I did during free time at school.  I didn't want to destroy the original drawing transferring it to wax so I traced it.  My "tracing paper" is actually the paper for blotting oil from your face.  I don't know what they are called in English. 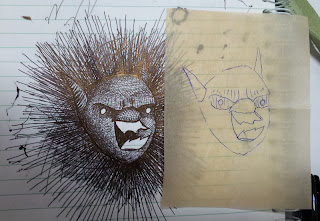 I attached my tracing to the wax by melting little spots of wax with my wax pen. 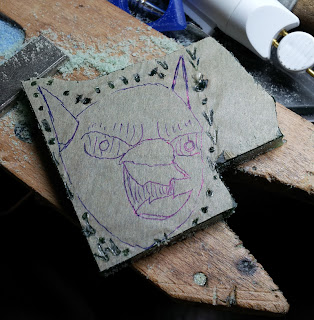 Then I poked holes along the lines of the drawing using a scribe.  After I took the paper off I rubbed baby powder on the wax to make the holes more visible and cut out the shape and filed the edges smooth. 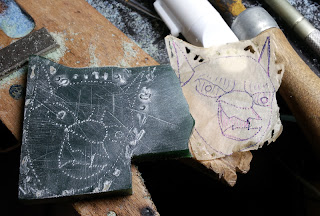 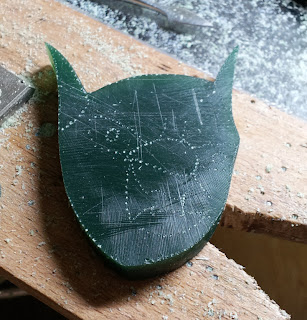 Next I deepened the lines using a wax carving tool and started to remove some of the material in the areas that will be carved the most deeply. 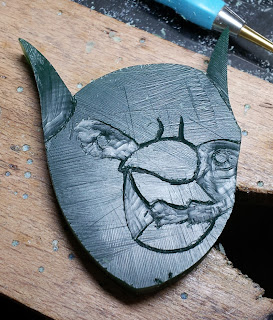 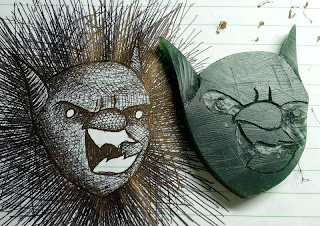 This is where I'm at now, there's still a lot of work to do.  I'm not carving the eyes, I'll put them in at the end by adding small drops of wax.  The piece is coming along very slowly cause I don't work very often. 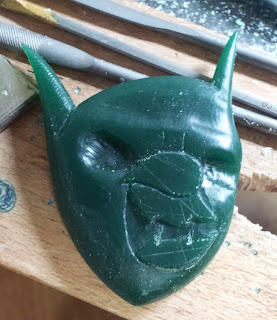 Below are two similar pieces.  The first one I carved in wax and cast around 2003.  The second one was carved in aluminum in 2006. 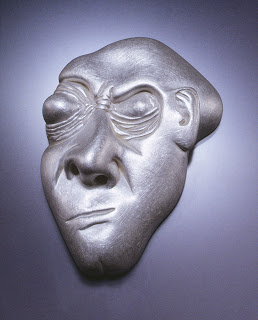 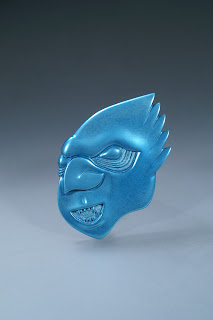 I came back to Korea March 1st.  I'm teaching at a public high school in Pyeongtaek.  It's about an hour south of Seoul.  I'm really glad to be back.
Posted by jon at 9:03 AM 1 comment: