As I said in December, I am trying to improve my skills.  So recently I got the book The Classic Goldsmith by Mark Maxwell, one of my former instructors at GIA.  It is sort of an intermediate level project book. Intermediate or higher level because the basics are not discussed, for example it might just say to set a stone, but not talk about how to do it.


I feel I need practice at fabrication so I am fabricating something similar to the first project, the Edwardian style brooch.


I also feel I am too dependent on the laser welder.  Even when I am soldering I like to tack things in place with the laser before soldering, so I am making the brooch without using the laser at all. 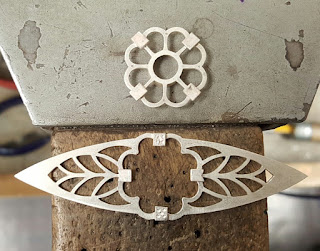 This last pic is where I stopped Saturday night.  It's going pretty slowly.  I don't have a lot of time to work on it and I am making it to the best of my ability.  I really enjoy working that way, going slowly and doing things as good as I can.  I'll post all the process photos after I finish it.


Another thing I have been working on is flush setting.  It's one of my favorite types of setting and also probably the one that I need the least amount of practice at.  Still I am trying to improve all my setting skills and this one is easy to do without preparing anything in advance, like bezels or prong settings, or channels.

I was in Tucson for the gem shows this past week.  I had not been there since 2004, when I still lived in San Diego and could just drive there.

I have a friend in the Phoenix/Mesa area so I also wanted to see him while I was there.  I flew to Mesa Monday, and hung out with my friend for a while then drove to Tucson.  Tuesday and Wednesday I went to the AGTA show and GJX show, which are the ones I really go there to see. Both of these shows are open to the trade only.  They are primarily gem shows, but there is also some finished jewelry, rough stones, and tools.

I wanted to buy 1 or 2 nice stones and some South Sea pearls.  On Tuesday I bought a tourmaline cut by John Dyer.  It was actually more than I had planned to spend on a single stone, but his stones are really well cut and that tourmaline had great color and that was just the kind of thing I was looking for.  The next day I went back and bought a small garnet from him.

I also bought three white South Sea pearls.  My mom asked me to get her some pearls for a pair of earrings, I also got one for myself.

Thursday I went to JCK Tucson.  My reason for going there was to check out the Form 2 3D printer. GRS was there so I also spent some time at their booth looking at some new tools.  Other than that I mostly felt JCK Tucson was a waste of time.

After that I drove to Mesa and met my friend and his wife for dinner, and flew back to Iowa Friday morning.

It was good to go to Tucson again and good to visit the Southwest.  I really like it there, and that makes it so hard to go back to Iowa.