What I've been up to

I haven't been doing any metal work for more than two months. In September I bought a Onewheel, a sort of one wheel electric skateboard. A few weeks after getting it I crashed and fractured my right humerus near the shoulder. I couldn't do anything that involved my shoulder. So metal work was completely out.

Hand and elbow worked fine, so I could write if I used my left hand to put my arm on the table. So I decided to use this time to re-learn calligraphy, which I have always been interested in, but was never willing to commit the time to doing. I took a calligraphy class at the U of Iowa in grad school and enjoyed it, but stopped after the class ended. Right now I don't have much application for this skill, but I am enjoying practicing it. This practice sentence below has a lot of problems, but I have improved a lot in the two months of practicing.


My arm is still not 100%, but it has healed enough that I was able to polish some lock picks on Sunday. There was no pain except for when I had to reach for tools. I think I am ok to start doing more work now.

New photo of an old pick

While I was in the US I photographed this pick I made in 2018. It is paper micarta with orange G10 inlay. The silver pins are capped with 14k gold.

My first year in Taiwan and my trip to the US

I've been in Taiwan for a year now. It was mostly good, but kind of boring. I wasn't nearly as social or active as I was while I was living in Korea. I mostly studied, did some CAD designs, and some jewelry/lock pick work. But I don't feel like I accomplished much.

The school I work at had a jewelry class for students and teachers once a week in the evening. I made a couple pieces, and the class was good to motivate me to set up my own bench at home.


I was accumulating tools all year, and got a work bench in November . I had my parents send a lot of my stuff from the US, I also bought a lot here. Since I have a fairly big rooftop patio, I'm able to make lock picks here, which I wasn't expecting to be able to do. It's too messy to do in an apartment. I got all the tools and equipment to be able to complete picks around February, but I only finished 3 picks before I visited the US in July.

I spent a lot of time working on pick handle designs in ZBrush that I was planning to 3D print. I had two designs printed in a few different plastics, but I was disappointed in everything I got. I had them printed by Shapeways, but everything has too rough of a texture. It's just not something I want to put my name on. I will give it another try if I find a company that can print in plastic with better detail.

I made two trips to Japan and Korea. Japan in September and January/February, and Korea in February and April. I don't really feel like visiting any other countries. Just Taiwan, Japan, Korea, and the US.

July 9th - August 5th I was in the US. While I was there I took a road trip from Chicago to Southern California. I saw some friends on the way, and also stopped at Rio Grande in Albuquerque, had a tour of their facilities, and looked at some equipment.


I also prepared a lot of wood to make picks while in the US. I use my milling machine to mill the wood flat and cut the slot for the tang of the pick, which I cannot do in Taiwan. I prepared about 55 pieces of wood while I was there, which is way more than I will be able to make in the next year. It feels good having so much wood available to use.

Another photo I never posted...

These two are snakewood, with pink ivory (a type of wood) and silver inlay. They both went to Australia last summer.

Last summer before I left the US (August 2018) I photographed a lot of my picks. After taking photos I always need to remove dust and adjust things like highlights and shadows in Photoshop and Lightroom. I mostly forgot about those photos after I came here, but recently I have been finishing them. There are still a few left to process.

It makes life here much better. I rarely drive to work, and I don't drive to Taipei, but I love it for other things like going to some stores that take a long time to get to on the train or bus. And having grown up always having a car, I just feel better having my own transportation.

Aside from the time I rented a scooter in Myanmar for a few days, this is the first time I have ridden one, so I am still getting used to it. After I am more comfortable on it I would like to take some trips around the island on it. 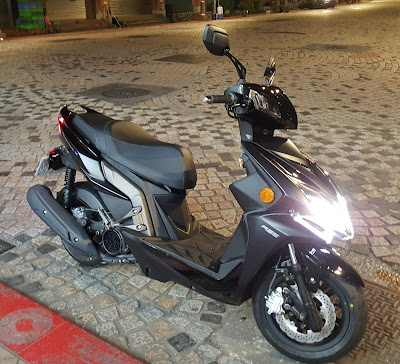 I got a small polishing motor last week. It is a bit under powered, and it doesn't have a dust collector, but I think it will be good enough.

I'm still not ready to complete any picks. Due to some delays in requesting the sanding belts be sent to me, I don't have them yet. And the other thing I don't have is some kind of wood finishing oil. I haven't been able to find what I want. I think I need to talk to a woodworker here about what to use. 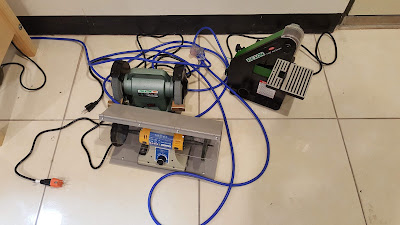 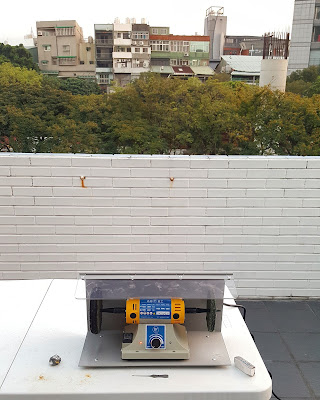 During my winter break I went to Japan and Korea, January 27 to February 8th. I took a short trip to Japan in September, but I had not been to Korea in over 2 years.

I went to Osaka and Kyoto in Japan. I just went sightseeing, mostly at places I have been before. February 3rd I went to Seoul. It felt weird to be back. All I did there was meet friends. I wish I had allowed a little more time to myself.

Some pics from my phone:

So far the most frustrating thing about working here is constantly getting to a point where I need a certain tool that I don't have and then having to wait to get it. I either have to ask my parents to send it, or buy it here. Of course, eventually that will stop happening as I slowly get everything I need, but right now I am stalled, waiting on sanding belts for my little NSK belt sander. After I get those I really think the only other things I will need to make picks are a polishing motor and buffs, and some kind of wood finishing oil.

This photo below shows where I stopped. I can cut more wood and grind/file more steel, but I can't finish anything. I will work on some jewelry while I wait for my sanding belts. 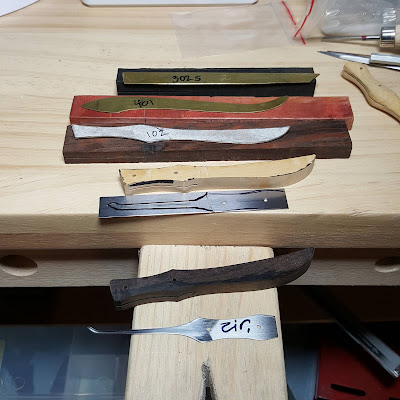 This is my outside work area where I do my grinding. This patio area is really the only thing I like about this apartment. 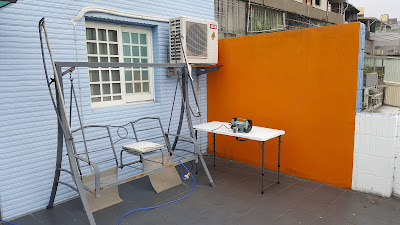 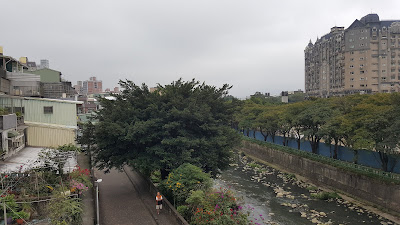 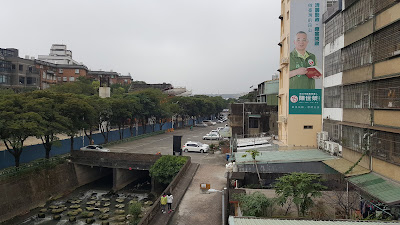 I got a bench grinder and belt sander last week. I now have almost everything I need to make picks again. I still need to buy a polishing motor and I need my hand files. My files are being shipped from the US right now, I should get them next week. I might have to wait till after my winter vacation to buy the polishing motor. With all the money I have spent on tools recently and with trip I am taking to Japan and Korea at the end of the month, I am not sure I can afford one right now.

I can't use the grinder and belt sander inside; it's too messy. So I bring them out on my patio to use them. 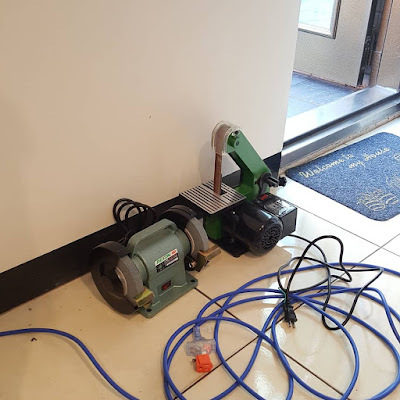 This is the outside work area. Not very exciting compared to my workshop in the US, but it should be adequate. I now have to work during the day time (always worked at night in the US) and when it's not raining. 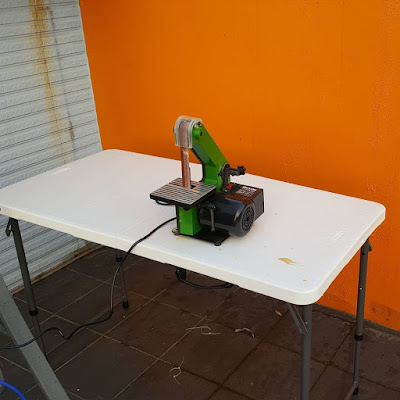 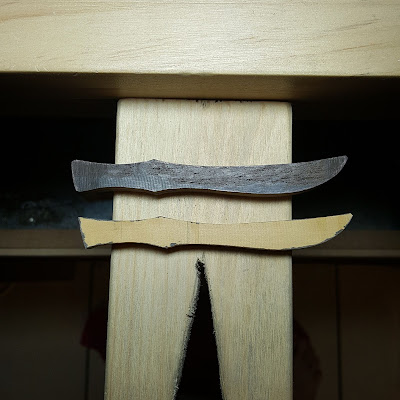 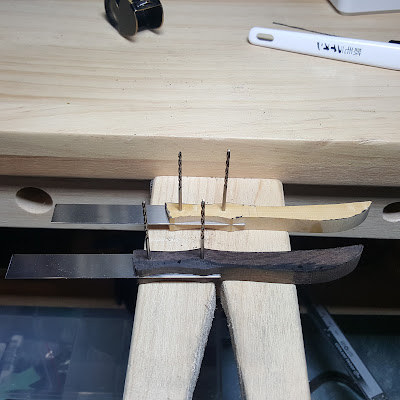 I'm stuck at this stage for now. I need to get my hand files to finish shaping the pick blade, and a polishing motor to polish it. 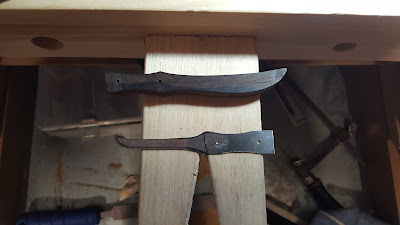