I'm still working on my scale necklace. I don't want to be working on it, but I am hoping to get it done in time to enter in the Cheongju competition. I have a couple other ideas for bracelets using a similar construction method, one of them is the enamel piece I am thinking about. I would much rather start on the bracelets, but I need to keep working on the necklace. Sometimes it's hard for me to stay focused on these things when I have so many other ideas. I think my attention span is shorter now than when I was younger.

Having a deadline for a competition or exhibition is good for motivating me to finish things I have been dragging out. When I enter a competition or juried exhibition I try not to think about the outcome, I just enter and try to forget about it till I hear the results. It's not too hard when I already have finished pieces to enter. But it is hard not to think about the outcome when I am working hard to try to meet a deadline. The hope that rushing to meet the deadline will pay off is what keeps me going when a deadline is coming up. But the more I think about getting into a show or competition, the harder it is when I am rejected. So sometimes when I am working hard on something like this scale necklace, I am wondering if I am just setting myself up for a big disappointment.
Posted by jon at 1:06 PM No comments:

I got some vitreous enamels last week for a certain piece I have had in the back of my mind for several years. I got the little sample kit from Rio Grande and a couple bigger jars. I have never done any enameled pieces, except for test pieces in grad school, which was a requirement for a class I was taking. Since I have never really done any enameling I also got the book The Art of Enameling: Techniques, Projects, Inspiration by Linda Darty. It seems to be a good book so far. I bought it on Amazon without having looked through it, I almost didn't get it because it has projects, but there's not much space devoted to them. 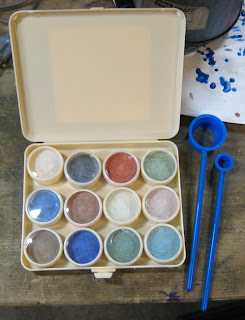 So far I am just doing test pieces. I like the rough granular texture from underfired enamel, what the enameling book calls sugar fired. That is my main interest in enameling. I am just as interested in the textures as I am the colors. 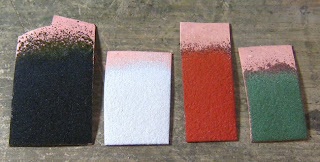 One of my friends teaches jewelry making classes at an art center in the Chicago suburbs. He is going to be moving out of the area soon, so I will probably be taking over the classes he was scheduled to teach this summer. I will post the details soon.
Posted by jon at 8:41 PM No comments:

I finished this lock pick a few days ago. The handle is snakewood, I really like it. I will definitely be using more snakewood in the future.

This is something I have wanted to write about for a while. I wanted to write about this hammer because I hate it. I like the size and weight, I modeled the hammers I made on this hammer, but it has one serious problem, and that is that it has a heavy chrome plating. There's a couple reasons why this is stupid, and I have yet to hear any reason why chrome plating is good.

I don't remember when I got this hammer, but I have had it several years at least. In the beginning it was fine, and I liked it. My friend also had the hammer, one day he told me that the chrome plating started chipping off his hammer. I thought that sucks, but my hammer was still ok so I didn't worry about it too much. A year or two later, the plating on the cross peen of my hammer started to chip off.

The problem with the stupid plating chipping off, other than looking like shit, is it is very thick plating, so it leaves a sharp edge which will mark the metal you are hammering. After this big piece of plating chipped off, the rest of the plating started chipping off. So I just went with it, and decided to try to chip off all the plating. It wasn't so easy, it chipped of easy enough around the corners, but the rest wouldn't come off.

Another problem with the head is the cross peen is too squared off and the edges are too sharp. Most people will want to make the cross peen more rounded. Having a hard chrome plating makes this more difficult and trying to round the edges will probably lead to the plating starting to chip off.

I can't think of any good reason for chrome plating the hammer. Rust prevention? That's stupid. It's a jeweler's hammer, not some tool that's going to be outside exposed to the elements. Did they want the head to look polished, but were too cheap to actually polish it?

No other Peddinghaus hammers I have seen are plated. Their other hammer heads are painted black except for the faces.

This is not the kind of thing I expect from a German tool manufacturer. 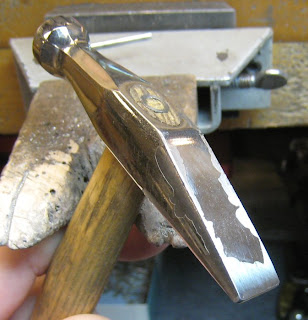 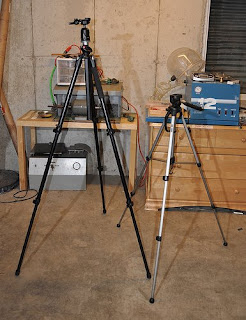 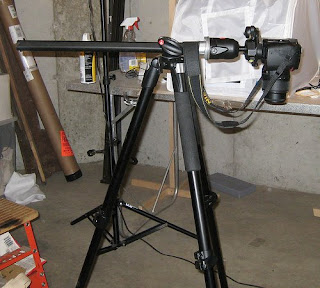 Taking care of that problem turned out to be very easy. The site was at some kind of free domain name registration site. I emailed the registration site about it and the next time I checked, the offending site had been removed.

And yes, they did steal my post about them stealing my posts.
Posted by jon at 7:48 AM 1 comment:

I am kind of pissed. I found some website stealing my blog posts to put on their site. The site is a blog, and there are other posts in addition to mine, probably stolen from other people's blogs. I assume the purpose is to get content for their site so they have some place to put ads. Hopefully people who arrive on that site will be able to see it for what it is.

I wonder if they will steal this post too?

My goal is to finish my scale necklace in time to enter in Cheongju next month. There's no reason I would not be able to finish in time, but the problem with these major pieces that get dragged out for years is they start to feel like they will never end. I started that piece in grad school in spring 2005. So while the piece is nearing completion, I am also feeling like after 4 years, is 5 more weeks really going to be all I need?

1. Other more important things come up that need to be finished (like work that I am actually being paid for). This happens with almost everything I am working on that does not have a deadline and I will not be paid for immediately after finishing (like work that I hope to sell in the future, rather than custom orders).

2. I have to make a decision about the design and don't know what to do. I never have pieces totally designed when I start on them. Some times I get too indecisive about certain things, and end up putting the piece down thinking I will decide later. Some times "later" is not for several months.

3. Work gets too boring/tedious. Like making these scales. Making waxes from the rubber molds, spruing trees to cast, casting, cleaning them all up. It's just so boring. The finished part of the necklace has over 100 hours of labor in it already. Boring boring monotonous labor. Or with my carved scale brooches, when I feel like I am not making any progress.

Sometimes when one of these reasons comes up and I stop working on a piece I will put it away and just forget about it.

When I sign and date a piece I usually just mark it with the year I finished it, not the years I took to finish or the year I started. I'm not sure what other people do, I usually don't bring up the topic of pieces taking years to finish due to procrastination when I talk to other jewelers or metalsmiths. I really have no idea how many other people do that sort of thing.

Pictured below are about 450 sterling scales for my necklace. They are almost ready to be attached to the necklace. I have about 50 more that I am still working on. After I attach those 500 I should be about finished except for the edges. 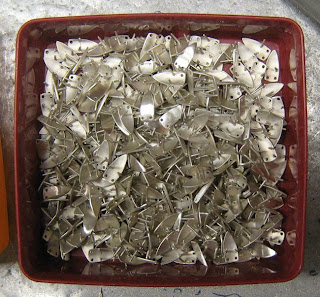 I finally finished and photographed my chasing hammer. I decided to copy an idea from one of my Flickr friends, Scott, and make the wedge out of ivory. Because it looks cool and I have had a piece of ivory for several years I never knew what to do with. He has an old hammer with an ebony handle that he made an ivory wedge for. He said he put the ivory wedge in his hammer about 25 years ago and the head is still tight. But I didn't talk to him about it till I was finished with my hammer and it was too late to do my wedge the same way he did his. So I will just have to wait and see how mine holds up.

I am glad I have finally made myself a chasing hammer. This hammer is going to replace the cheap Pakistani chasing hammer I have been using. Everything I make is usually either sold, I try to sell, or is kept for exhibitions. Very few things I keep just for myself. 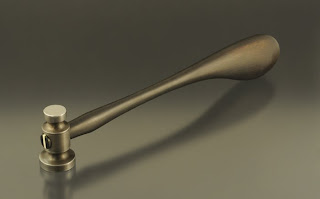 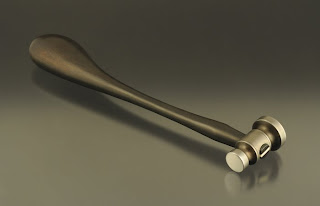