Friday I got a couple more enamels and some enamel adhesive. The adhesive is for getting the powdered enamel to stay on curved or vertical surfaces before it's fired.

I did some more enamel tests last night. The piece below is a little copper cup I keep my punches and repousse tools in. It started out as something quick I made in 2005 to practice raising. Later I gold leafed it to practice applying gold leaf. I never liked the gold leaf on it very much, so last night I decided to sand it off and practice enameling it.

It's torch fired. I built up 3 layers of enamel, firing it after each layer. I fired the last layer twice because I didn't think it was fused well enough. I am mostly satisfied with the way it turned out. I heated it from the inside, except at the very end I passed the torch over the outside directly on the enamel. That darkened the enamel slightly, making it look kind of dirty. I shouldn't have done that, but that's the purpose of doing a practice piece, now I know not to do that on light colored enamels.

This went pretty smoothly. My previous experience with enamels wasn't very good. I remember having trouble with the enamel cracking off. That was part of the reason I never did any enameled work. I was really interested in enameling in the early 2000's, but I didn't know anything about it, and I thought you needed to use a kiln, which I didn't have. By the time I got to try enameling in 2005 I was no longer interested in it. I did my required sample pieces for a class, which didn't go very well, and decided enameling was not something I wanted to do. I am interested in enameling now because I am getting a little sick of anodized aluminum, but I still want to use colors, and I like the textures. 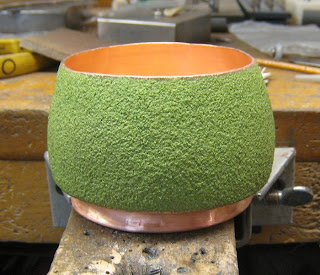 I'll probably practice enameling more on another raised cup I keep small tools in later this week. Practice pieces are more fun when its something you will keep and use. 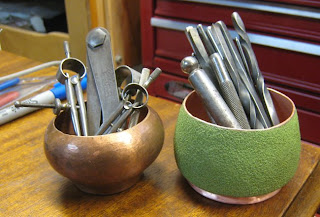