Yesterday I mostly worked on fixing the problem with one of my pieces that I mentioned at the end of my previous post. It's an issue that comes up with the aluminum occasionally. I don't really understand it and I don't want to talk about it. 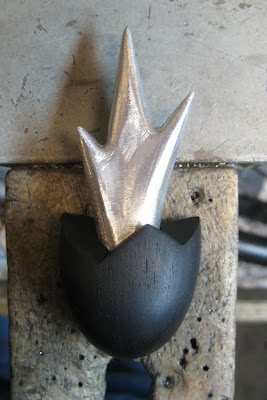 I should have done something different early on in the process that would have made things much easier. Before I started carving the aluminum part I should have put it in the lathe and made the bottom of the thing cylindrical so it would be easy to just drill a hole in the ebony and put it in. 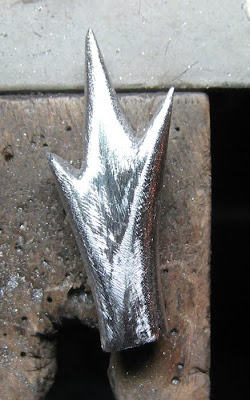 Since I just free handed it with my micromotor it's not round. Which means after I drilled the hole in the ebony, I had to use a wood carving bur (pictured below) to try to make the hole match the shape of the aluminum piece. Doing that sort of thing is never easy. And of course what I ended up with was there being a gap between the aluminum and ebony in some places. Now I am trying to figure out the best way to make it look good. I wonder if my explanation makes any sense?

Speaking of wood carving burs, I think these spiky ones are so cool. I also like that they come in different colors. But they can totally tear up your fingers worse than any thing else I have experienced. 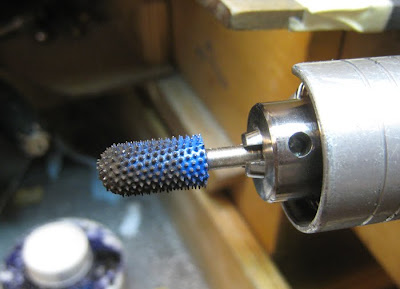 Keeping with my decision to finish all my unfinished pieces this winter, I decided to give up on finish this spoon in the photo below. It's not finished to my standards at all, the casting is so bad I think it would be faster for me to just remake the piece rather than try to fix all the pits. But this piece isn't important enough to remake.

I am not sure if I wrote about this spoon at all before, I carved the wax around 2000 or 2001 during my 4 year wax carving spree, and cast it in three parts in 2007. I don't know what happened with the casting, but two of the parts are just terrible. I worked on it for a while and finally put it aside cause I didn't want to deal with it. So now I just want to call it done and not worry about it anymore. I have no plans to photograph it any better than the photo below.